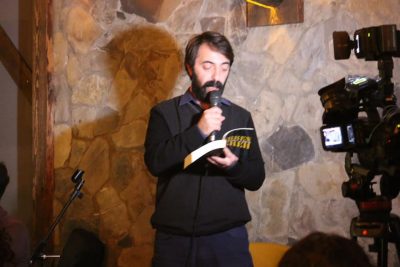 Kawa Nemir: Kurdish poet, short story writer, translator and editor. Born in Igdir, Turkey, Nemir received his education there and in Istanbul. He studied English language and literature at Hacettepe University in Ankara and at the University of Istanbul. Later he studied ancient Greek language and literature in Istanbul for two years.
He has left his name on many important works in Kurdish culture and literature. Between 1997 and 2003, he worked as editor-in-chief of the Kurdish monthly culture, art and literature magazine Jiyana Rew?en, which published 52 issues, and the magazine Rew?en-Name, which published three issues. Both magazines were supported by the Mesopotamia Culture Center, an important institution for Kurdish culture and literature. They both are generally perceived as to represent fundamental views of Generation 90 or Generation Rew?en, the literary tendency to which today’s most influential young Kurdish poets and writers adhere to.

He has translated into Kurdish the works of many British, American, Canadian, Irish and Turkish poets, novelists, storytellers, and dramatists, including many English-language poems. He has translated 103 books into Kurdish, most of which from English, and 24 of them have been published so far.

In 2012, the world premiere of his translation, Hamlet, was organized in Amsterdam, in which he played the part of Hamlet, the King. He wrote the theatrical adaptation of the Mem and Zîn of Ahmad-i Khani, the great Kurdish poet of the 17th century and it was performed in Diyarbakir in 2014.
Nemir lately has completed the translation of the Ulysses by James Joyce into Kurdish.

He translated the opera Tosca by Puccini into Kurdish and it premiered in Amsterdam in the autumn of 2019.
In 2010, he was awarded the Feqî Huseyn Sa?n?ç Language Award, which is annually given by the Kurdish Institute of Istanbul, in honour of his services to the Kurdish language.
He is hooked on Shakespeare and Joyce.