“The Burrow”: a duo exhibition by Minne Kersten and Jorik Amit Galama.

The exhibition “The Burrow” approaches the current obsession with feeling at home by looking at the specific intimacy people experience in their own house. The temporary expelling of the rules of public life creates a place where one gets as close as possible to something of a true self. At the same time, the vulnerability of this constellation often implicates the anxiety for its loss. The works in the exhibition encapsulate this fragility and play with the question what we try to protect with the notion of the home. “The Burrow” will thereby host installations of shelters, cavities, secret saves, hide-out places, and things that grow when left unattended.

About:
Minne Kersten (NL) is an Amsterdam based visual artist and writer. She studied at Rietveld academie (Text & Image department, 2016). Her installations derive from fictional stories and metaphors about domesticated environments. She is interested in the living spaces that surround humans and how these are interacting with our bodies pumping of blood, flesh, skin and organs. Working across video’s, set-building and storytelling, she researches notions of architecture in relation to all sorts of building processes found in nature- and city life.

Jorik Amit Galama (NL) is an Amsterdam based visual artist and writer of fiction and art-criticism. He graduated from the Text and Image department of the Gerrit Rietveld Academie in 2016. Working with the video essay as his main visual medium, he focusses on the ways in which image cultures determine people’s behavior and how they try to rid themselves of this influence. His work often touches on topics related to anxiety and trauma, thereby drawing inspiration from methods of therapy.

The exhibition The Burrow is supported by the Amsterdam Fund for the Arts. 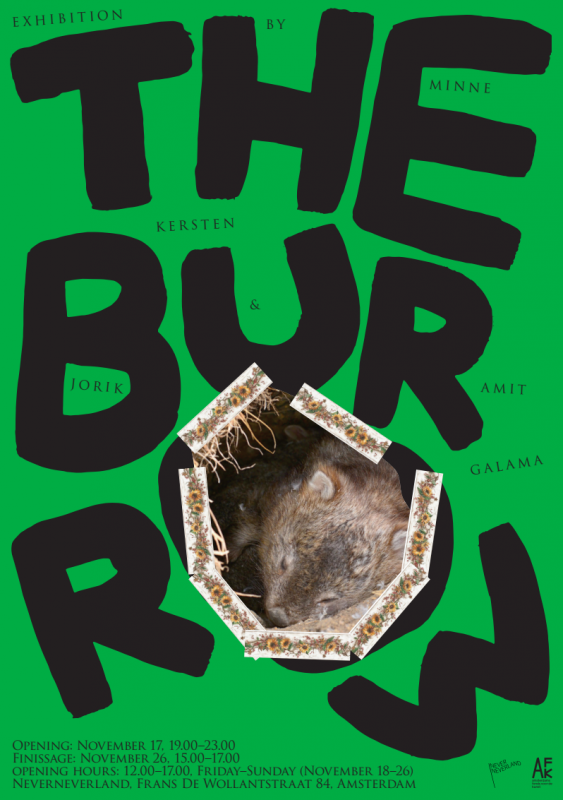